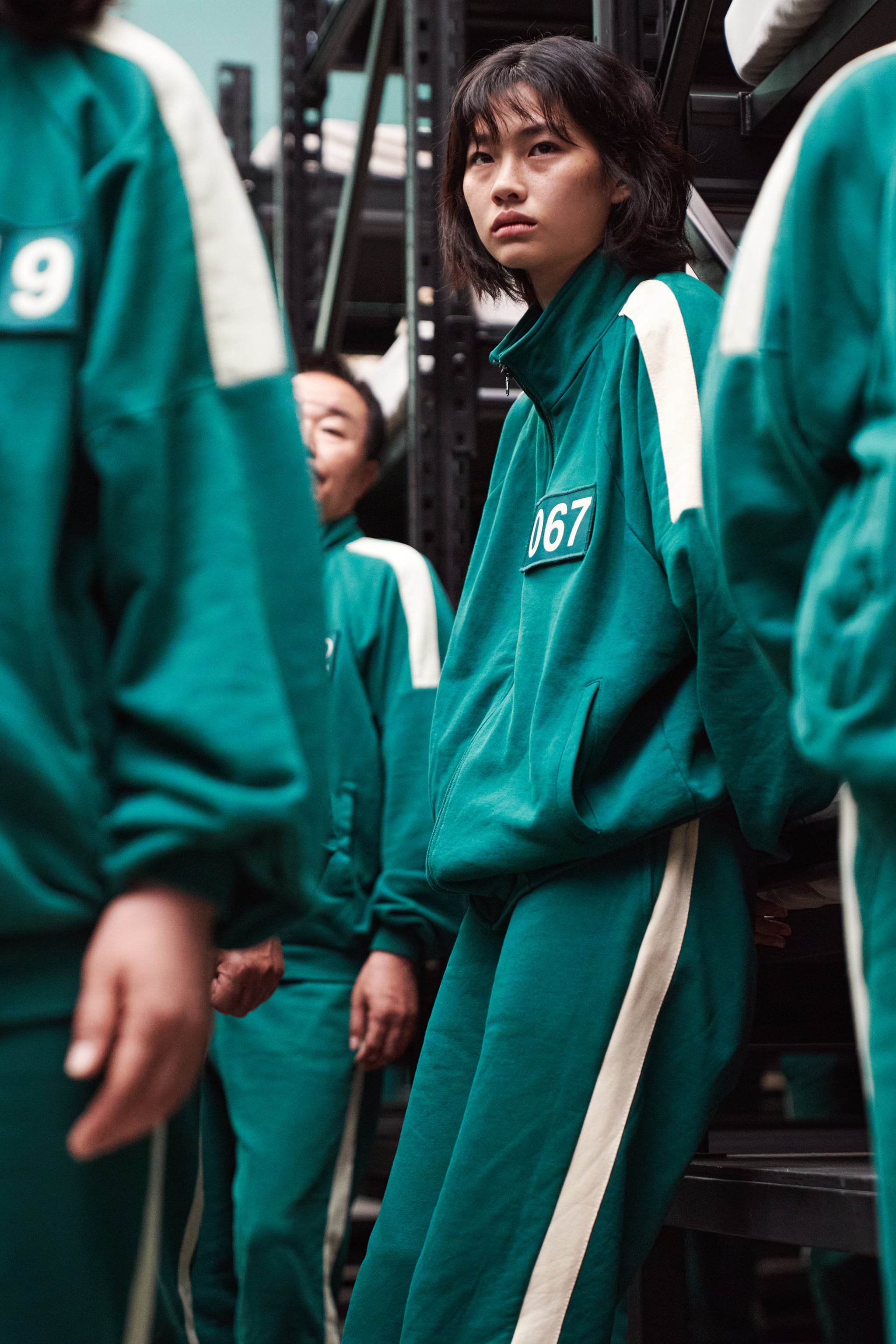 Still thinking about Squid Game? Me too.

I’ll admit it: I was sucked into the Squid Game vortex with the rest of the 111 million people who watched the runaway South Korean Netflix hit. The plot twists, incredible acting, and fascinating escapism of the show captivated me, but it’s the ultradetailed world building that Squid Game does that has kept it lodged in my brain (and nightmares) for months. All that creative world building produced some fascinating details and symbolism in the costumes, adding to the complex and clever layers of the show. In case you’re still thinking about Squid Game like me, here are some of the most interesting details to enhance your next rewatch.

Warning: spoilers abound ahead, so proceed with caution if you haven’t watched yet.

The Original Style Concept For the Guards Was . . . Boy Scouts 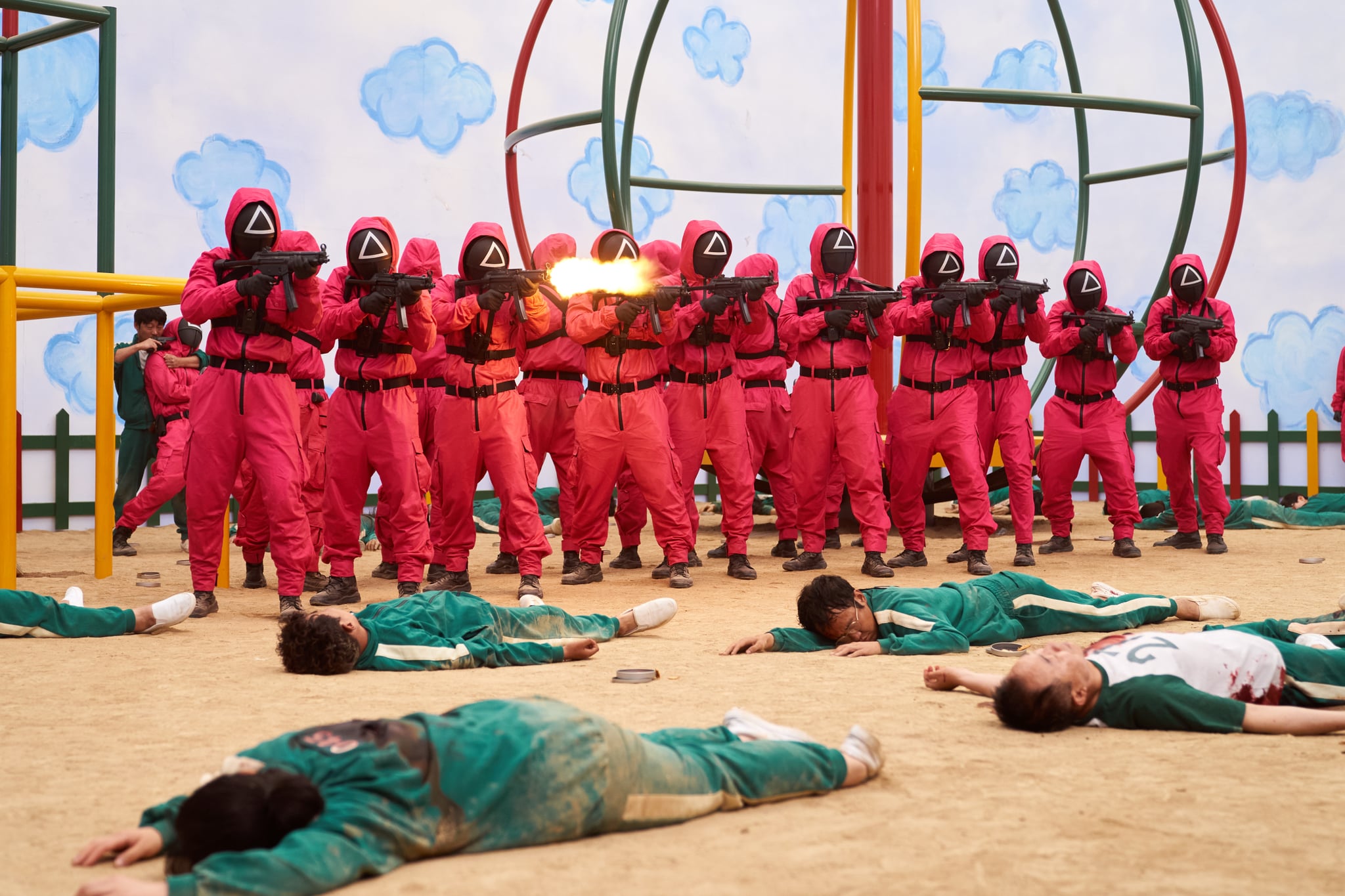 The now-iconic pink boiler suits the guards wear almost never happened! Director Hwang Dong-hyuk’s first thought for outfitting the imposing guards was to lean further into the ironic schoolyard nostalgia aesthetic of Squid Game. “At first, I wanted a Boy Scout-like outfit,” Hwang explained in an interview with Netflix Korea. “But it showed the men’s figures too well. It didn’t really make them look like ants in a colony. They needed to cover their entire body and the best option to keep them anonymous was a jumpsuit. With a hoodie too, because they need to cover their faces.”

Speaking of those guard masks . . .

The Black Masks Had Multiple Fascinating Sources of Inspiration

One of the trickier components to create were the guards’ masks. “I worked on a lot of different mask designs. The mask went through countless designs,” said Squid Game art director Chae Kyung-sun. The masks had to check a lot of boxes in order to make it into the show. “It has to be comfortable, allow you to see clearly, and show their status,” Chae explained. Hwang admitted, “We tried animals and some other weird stuff,” before settling on the style.

The final concept that made it into your living room (and, probably, your Halloween costume) was an amalgamation of several sources of inspiration including fencing masks, which have screened face shields, and traditional Korean hahoetal (하회탈) masks, some of which have hinged jaws. That latter element became important as Hwang requested that the masks be foldable.

The masks of the oppressor guards were also inspired by ant colonies. When looking at an ant colony from a distance, it’s impossible to tell the tiny bugs apart, but within the colony, different ants have different duties, responsibilities, and tasks to accomplish. The guards are similar in this way, and the circle, square, and triangle shapes painted on their masks are the ways they can tell each other apart. The circles represent workers, who you’ll see bringing bodies to the crematorium. The triangles are worn by machine-gun-wielding guards. Finally, the squares are worn by managers who oversee all the other pink-boiler-suited characters.

The circle/triangle/square shapes are echoed across the series, not only in the guards’ masks but also in the show’s logo and opening credits, as well as on the cards given out to recruit players to the game and in the children’s squid game court. In the Korean alphabet, Hangul, “squid qame” translates to “오징어 게임” or “ojing-eo geim” when Romanized and sounded out phonetically in the English alphabet. The series abbreviates the phrase “ojing-eo geim” into “OJM” or (roughly) in Hangul “ㅇㅈㅁ,” which visually appears as our often-repeated circle, triangle, square motif.

Those Green Tracksuits Are Recycled From a 1970s Political Initiative 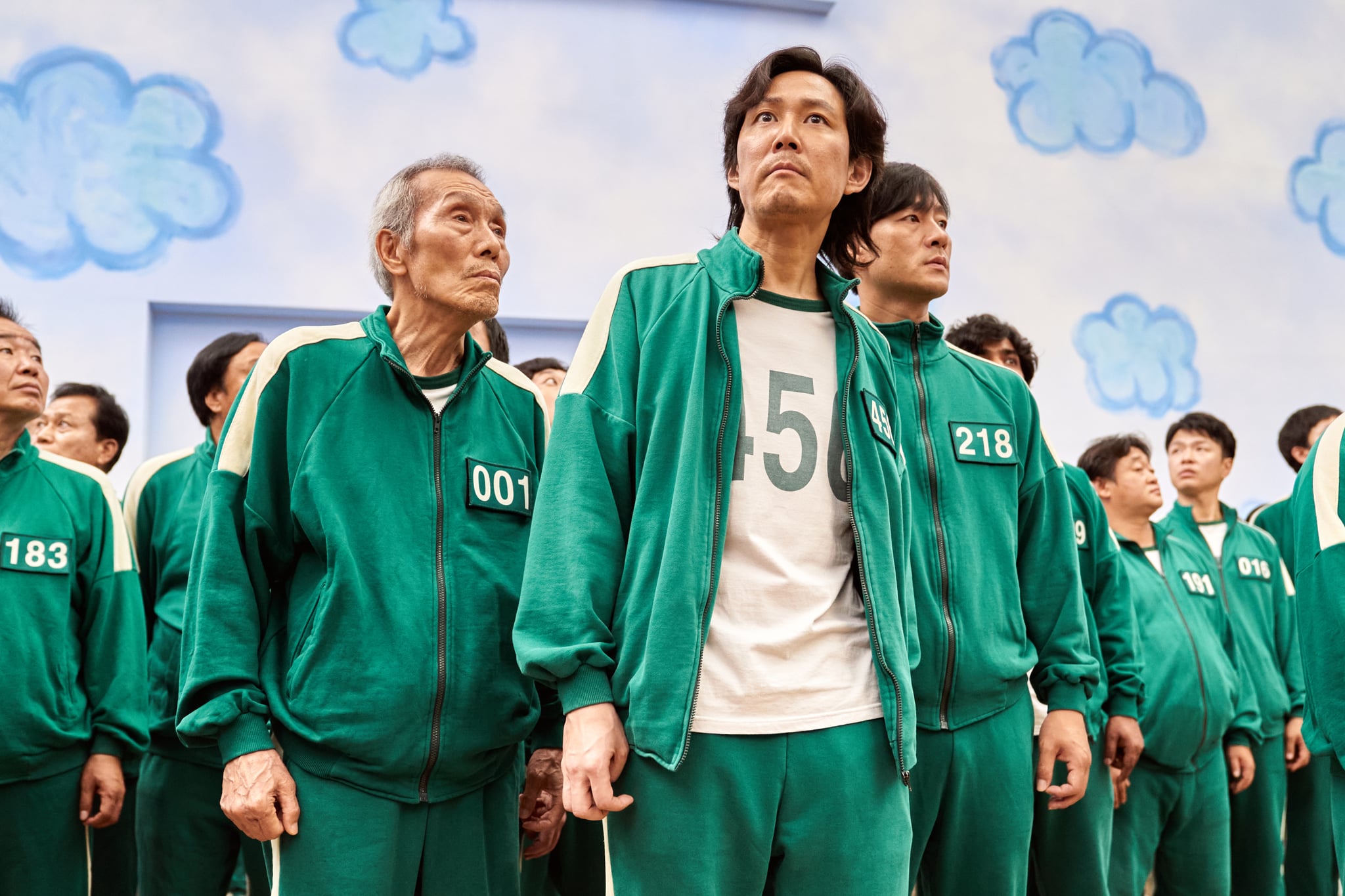 The normcore dystopia couldn’t be normcore without those white sneakers and green tracksuits. The specific shade of green was instantly recognizable for Korean audiences, but the cultural reference was probably lost on the larger international audience.

In an interview with The Korea JoongAng Daily, Chae said, “We decided on a popular green color from the Saemaul Movement [a political initiative launched by President Park Chung Hee] and the tracksuits children wore on field days at school during the 1970s. This may seem retro and kitschy, but they have their own nostalgic charm.”

On the opposite end of the Squid Game power dynamic from the green-clad players are the hot-pink-clad guards. Pink and green are also opposite each other on the color wheel, reflecting their juxtaposition in the series as well. That was a deliberate choice by production, Chae elaborated: “We chose pink [as one of the main colors] as well because it is a color frequently used in fairy tales. But we [the production crew] came up with our own meaning [depicted in Squid Game]. Green is terrified of pink because it monitors and suppresses green.” 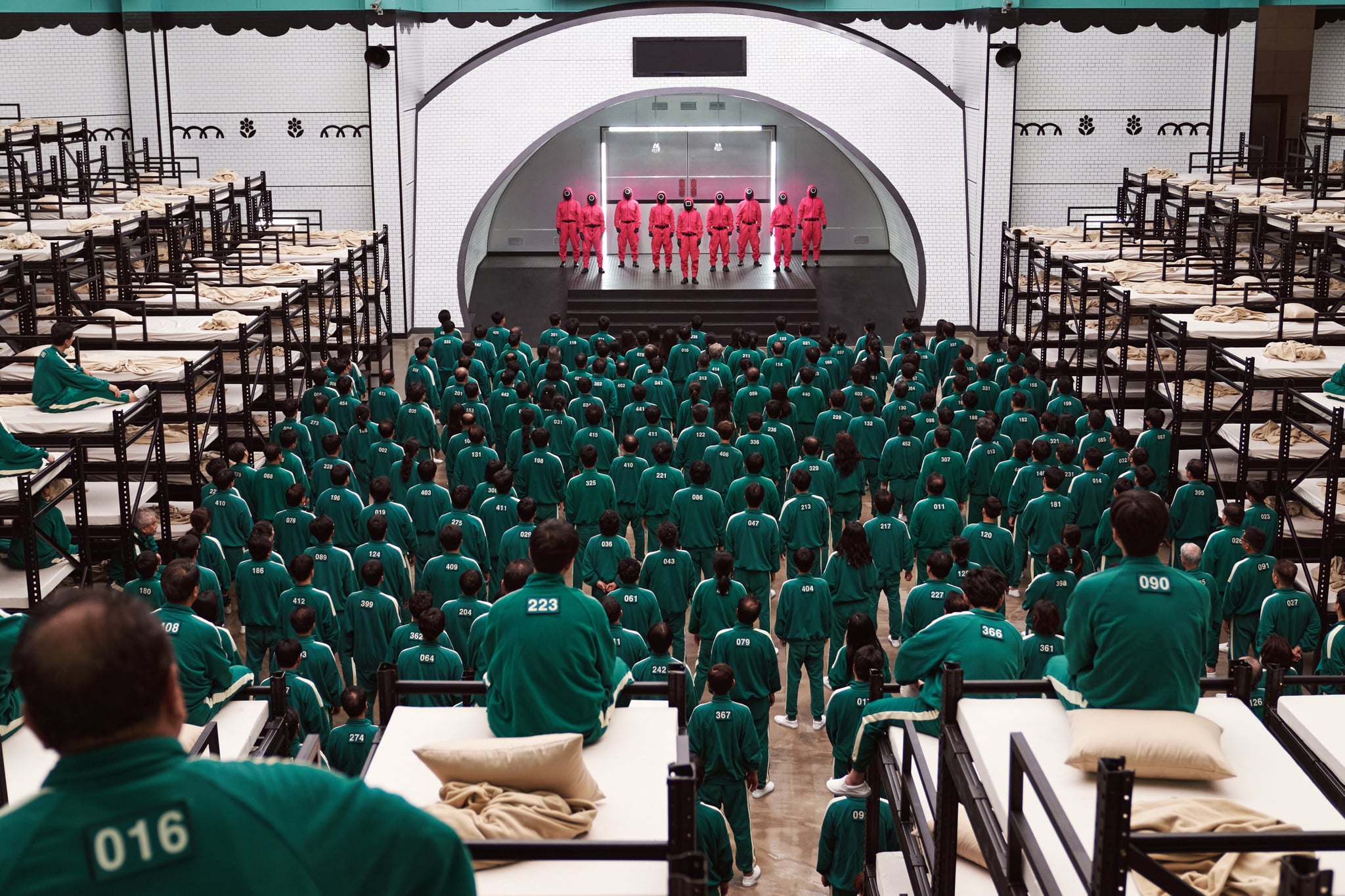 Did You Catch That Subtle Star Wars Reference?

In an interview with The JoongAng, Hwang revealed the matte-black, multifaceted mask worn by the villainous Front Man was inspired by one of the biggest movie villains of all time: Darth Vader. The mask was purposefully designed differently from the masks of the other game guards in order to spotlight The Front Man’s subplot, which heightens the reveal of his true identity. “It’s a mask that gives a little personality,” Hwang said.

Everyone who has watched Squid Game has an opinion about Seong Gi-hun’s finale-episode makeover. The cherry-red hair is a move K-pop idols pull all the time, but it’s almost never seen on middle-aged men in South Korea. Even Lee Jung-jae, the actor who played Seong Gi-hun, was surprised by the script. He explained, “I talked to the director and asked why I should dye my hair red because it’s a color that ordinary men at Gi-hun’s age don’t do. I think it was a will to show actions that go beyond the limits that people think Gi-hun would never do.”

Hwang confirmed that, while it might have seemed like a random makeover, the idol-worthy cherry-red hair was a deliberate choice. “I imagined being him and thought to myself, ‘what is the color that you would never choose to dye your hair?’ Then I came to the conclusion that Gi-hun would never dye his hair red,” Hwang explained. “It would be the craziest thing for him to do. So I chose the color and I thought it really showed his inner anger.”

That inner anger builds in Gi-hun all the way to the final moment of Squid Game when he is pulled from the jetway and a promised reunion with his daughter to instead chase down the mysterious game-playing man in the subway to . . . who knows? Warn the potential contestant against entering the Squid Game? Dismantle the entire macabre competition? Your guess is as good as ours until Squid Game season two is (hopefully) announced.

[ad_1] A good pair of boots is an essential component of any winter wardrobe. While most people change up their outfits daily, once they’ve settled on a pair of boots that are comfortable and they feel great in, they’ll wear them day in, day out – which is why it’s important to invest in a...

[ad_1] T winkle twinkle little star, how I wonder where you are. Sadly you won’t be sorely missed because beautiful Black women have been shining brighter and brighter without signs of stepping on the brakes. Last week, colors splashed, shimmers shone, confidence soared and glam reigned as your faves stepped out in celebration of their...