In the candid cover profile, written by Alex Bhattacharji, the actor, writer, producer, entrepreneur, viral marketer and cultural maven reflects on his career, managing his anxiety, and his motivation for shoring up future entrepreneurial prospects – all in hilariously self-deprecating fashion. 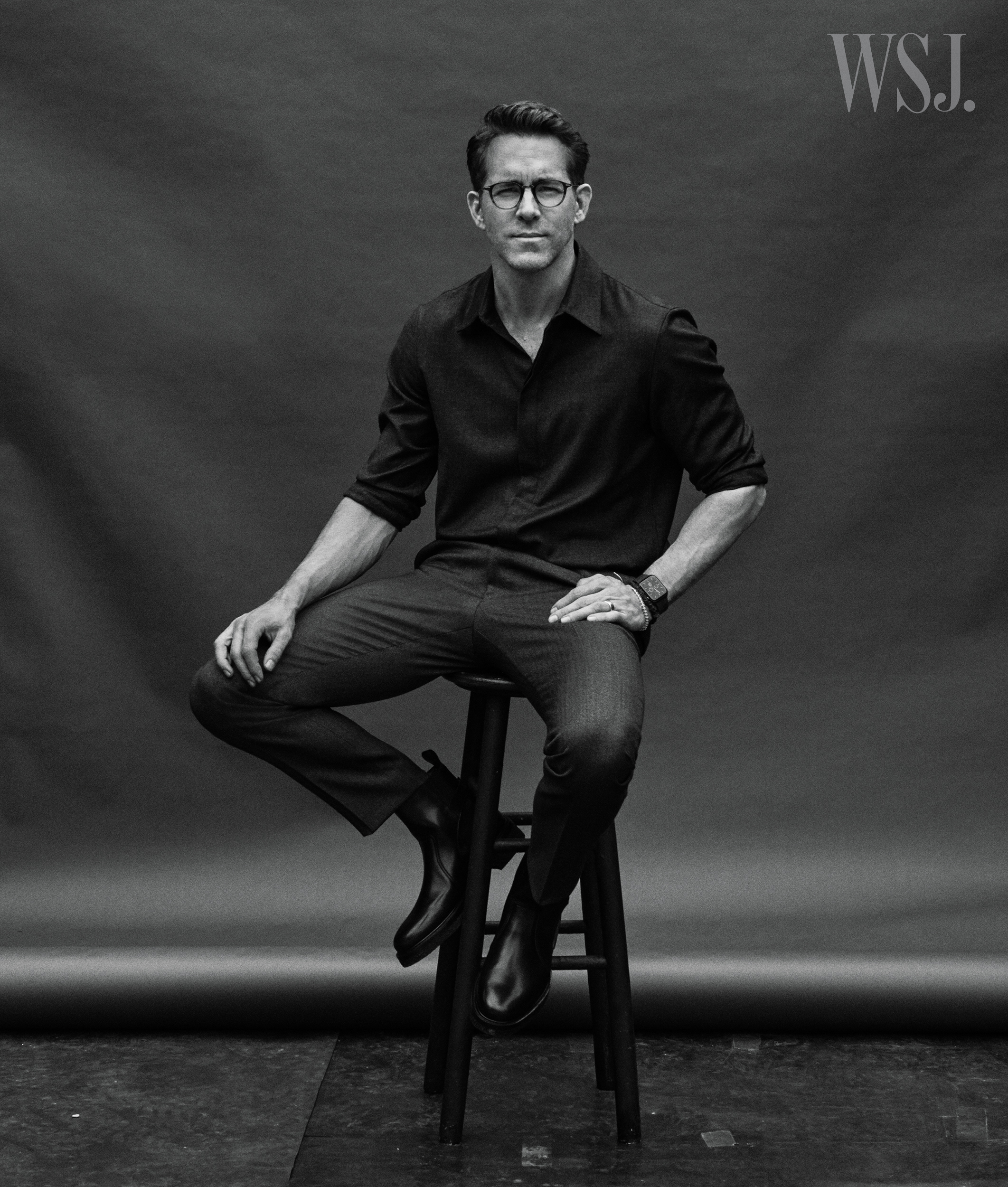 Reynolds on his busy schedule:

“Full disclosure: I shot till about 3:30 this morning; drove till 5:30 or 6; slept for an hour and a half until two of my kids punched me in the face,” says Reynolds, clad in a floral western shirt, gray pants and tan leather boots. “So…finding my words may take a second. Good thing. There’ll be less for you to bleep out.”

Reynolds on his tendency towards anxiety-inducing over achievement:

“I tend to bite off way more than I could or should chew,” Reynolds says. “I think maybe it’s just that Canadian sensibility: ‘Well, I said I was going to, so I have to deliver this.’ I will do that at the cost of my own well-being sometimes.” Ryan Reynolds WSJ magazine.

“I fixate on things,” he says. “That’s sort of the engine of anxiety. I lay awake at night, wrapping and unwrapping every possible scenario. I slept at a perfect right angle for so many years.”

“I tend to pave over anxiety with work and, to a lesser extent, achievement,” he says. “You want to tick boxes sometimes. So these days, my goal is to be as present as I can and not just tick a box just to do it. I’m fully embracing and living that right now. It’s been amazing.” He makes a check mark in the air. “OK,” he says, “heartfelt personal-growth quote: check.”

Reynolds on taking authorship in his career:

“While I was obscenely privileged to star in movies, a lot of times they weren’t working,” he says. “That’s when I said, ‘I need to have some authorship here. Because I have a sense of how to do this in a way that will work.’ ”

Reynolds on his Maximum Effort agency: 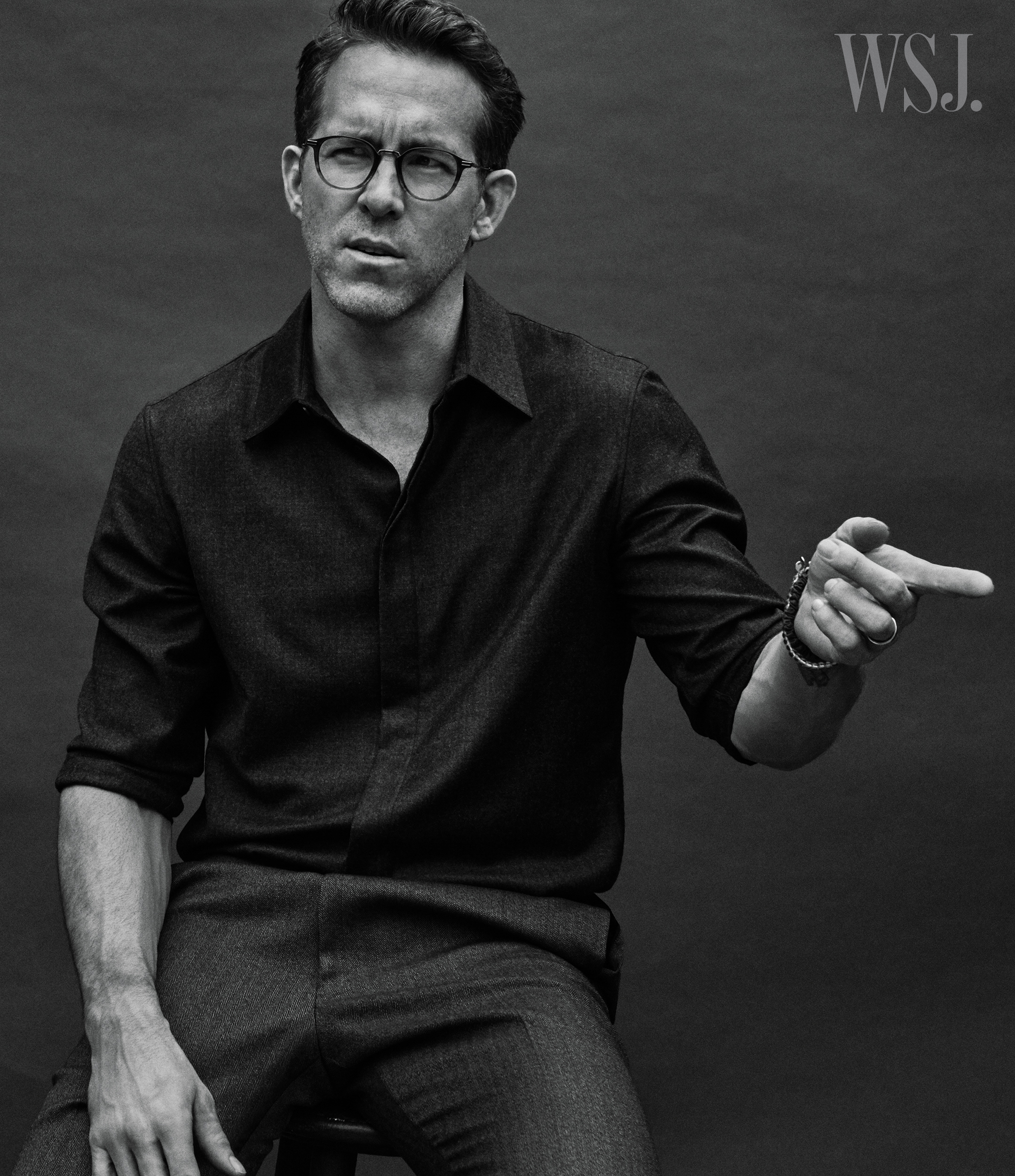 While many turn their nose up at it, he sees art in commerce. “It’s not a one-size-fits-all kind of thing,” Reynolds says. “We love storytelling. Marketing, to a certain extent, is diet storytelling. It’s a model that prioritizes creativity over profit. “Everything we do is scrappy,” Reynolds adds. “It’s fast, it’s inexpensive, character over spectacle. I think that you’re capable of much greater things when you’re using fewer resources, you just are.”

Reynold on the comparisons between himself and his Free Guy character:

The comparison isn’t too ham-handed, Reynolds says, smiling: “No, it’s very much the right amount of jambon. For the longest time, I was a passenger in the work I did. Then one day you say, ‘What if I was maybe more than that? Is that OK?’”

Reynolds on acting in the upcoming Red Notice: 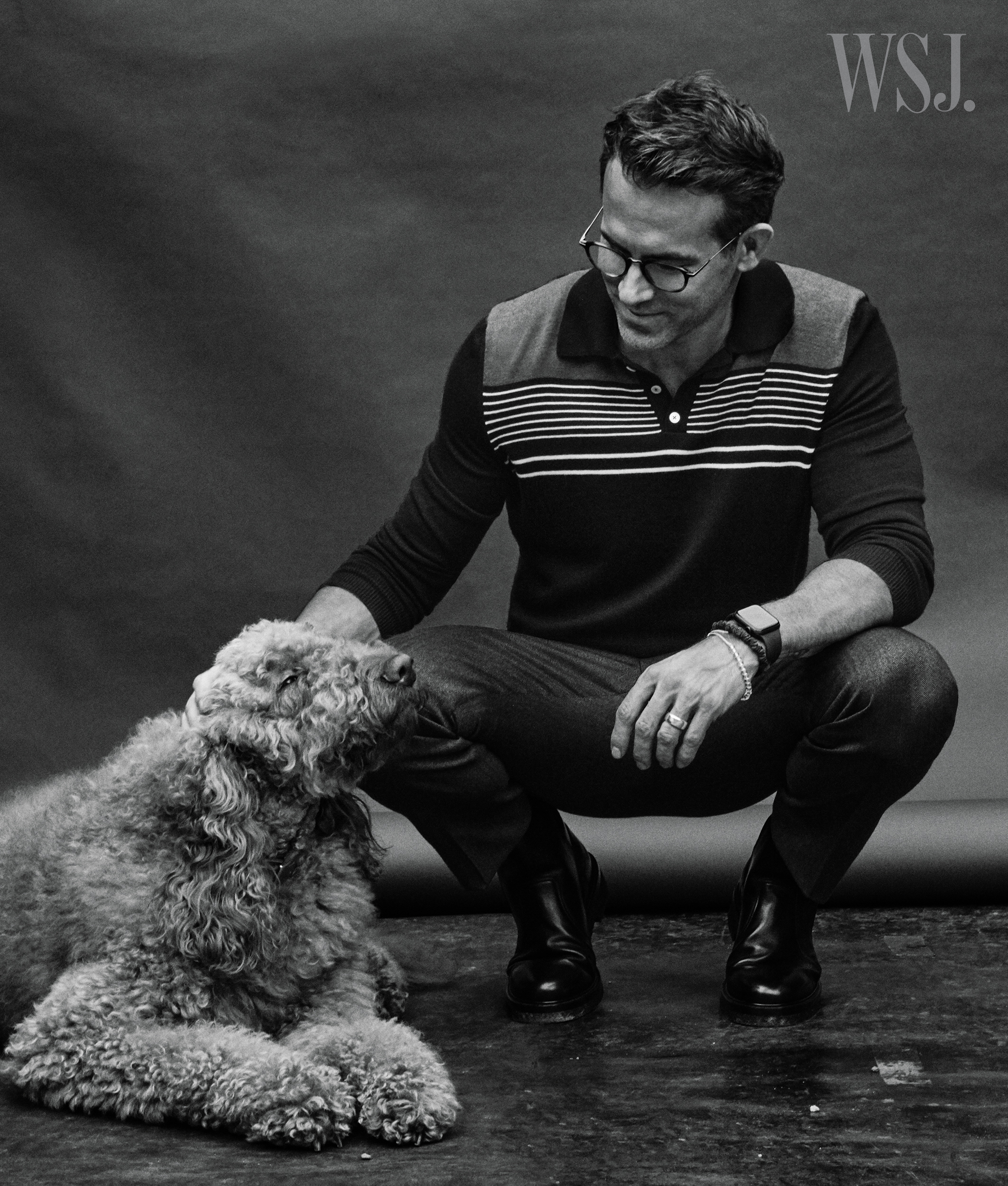 “A movie like Red Notice was a lot of fun for me,” Reynolds says, “because I don’t have to worry about structure or any of that other stuff. I just get to write 10 alts for every joke and have a blast.”

“He keeps everything alive and electric,” she says. “His brain’s always working on how to make it better, more delightful, funnier.”

Reynold on how his upcoming The Adams Project forced him to re assess his father:

Although the movie takes audiences on a laugh-filled adventure, it took Reynolds “to a place that I was never expecting I would ever go in a movie.” The high-concept time-travel film forced him to reflect on his father and his own mythmaking. “He was a very tough guy,” Reynolds says of his late father, who died of Parkinson’s disease in 2015. “He had kind of an Archie Bunker kind of mentality about him, which for me, as an incredibly sensitive kid, was tough. But at the end of the day, I think I put the monster makeup on him, and I don’t know that that was fair. These stories that we tell ourselves—we can fictionalize memories to fit our own narrative. Like, ‘I’m a funny guy because my dad was an a— hole.’ But that’s not true. I’m not funny.”

Reynolds on the impermanence of his movie star status: 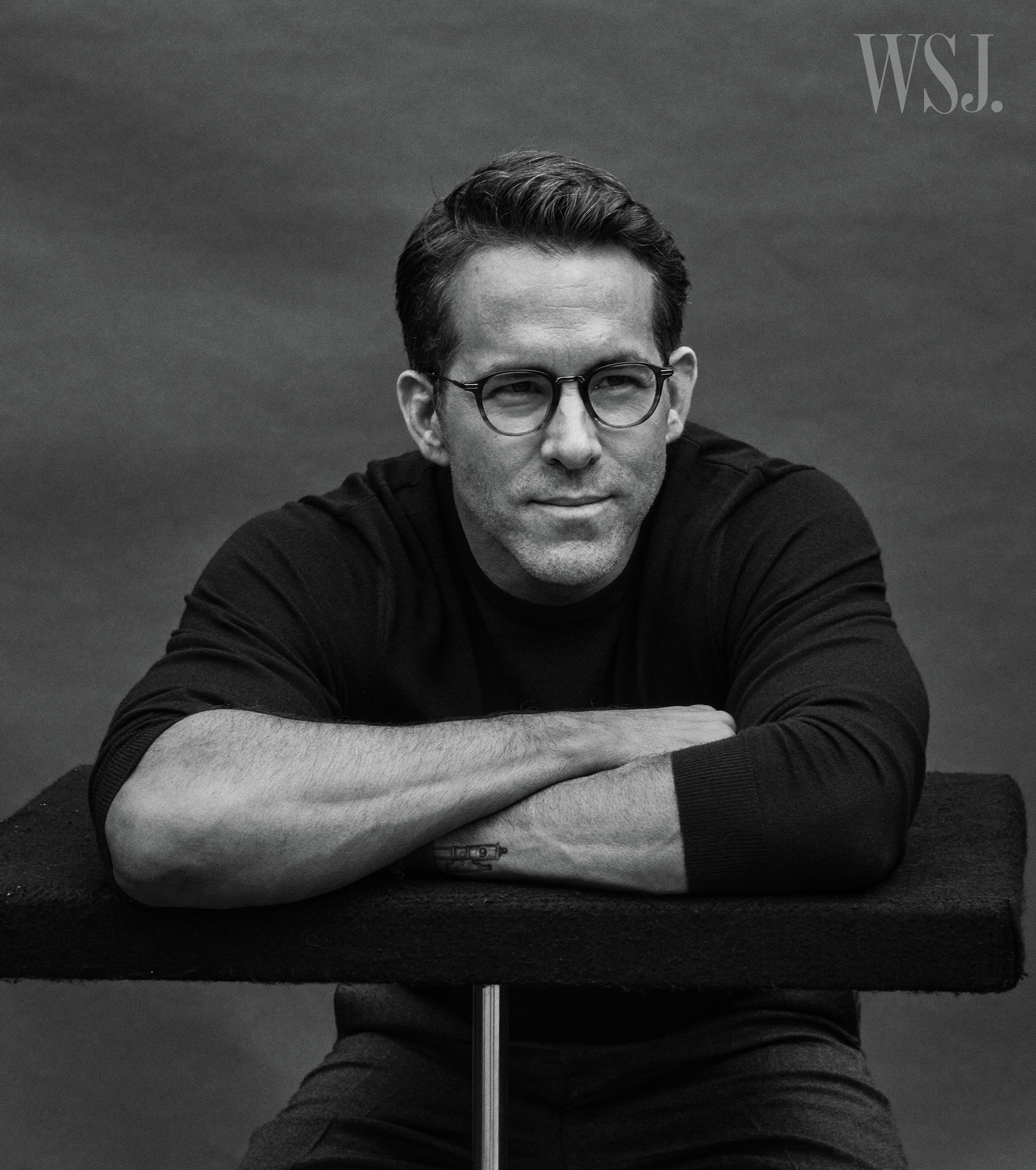 “I will not be a movie star at some point,”

“Right now, I’m in a position of unspeakable privilege, where I can enact something like this. At some point, I will not be,” Reynolds says. “So the hope is that you’re creating a template so that it becomes sustainable.”

Reynolds on the future:

“The future is going to be…. Look at this!” Reynolds says, as his youngest daughter pushes through the door, saying “Hi, Dada.”

Indeed, the light is fading, but Reynolds seems energized, picking up his daughter and nuzzling her as she pushes on his nose.

Following the toddler into the room is Lively, dressed in designer sweats and a chambray shirt. “She was begging to see you,” she says to Reynolds, “and she’s about to go to bed.”

“The future?” Reynolds continues after a moment. “I’m going to put this one to bed. Then when I put myself to bed, I’ll lie awake.”

[ad_1] As POPSUGAR editors, we independently select and write about stuff we love and think you’ll like too. If you buy a product we have recommended, we may receive affiliate commission, which in turn supports our work. The name’s Harvey, Lori Harvey, and she’s passed her latest style assignment with flying colors. During a getaway...

The Importance Of Good Sleep – And Sleepwear! – Bra Doctor’s Blog

[ad_1] You have heard this piece of advice time and time again. It may feel like it’s getting old, but you probably need to hear it again: good sleep is important! It is incredible what a healthy, consistent sleep schedule can do for your overall well-being. From sharpening your mental clarity, to easing stress and...